Power over Ethernet (PoE) and port speeds are two features that you may find on your VoIP phones. Here's what they are and how they affect your phone system.

When considering VoIP phone options, you'll notice that they vary in Ethernet speeds and support for Power over Ethernet (PoE). These features may seem like minor details, but they can actually affect the deployment of your phone system, the cost of your networking setup, the amount of physical space in your office, and other maintenance considerations.

Your ISP's internet connection will likely vary between 100 Mbps and 1 Gigabit (1000 Mbps). This determines the speed of your internet, which affects the quality of online activities such as voice/video streaming, file downloads, and web page load times.

Ethernet ports, on devices such as VoIP phones, are manufactured with internet speeds in mind. Ethernet ports on VoIP phones on the market today support 10 Mbps, 100 Mbps, and/or 1000 Mbps (1 Gbps / gigabit) connections. 10 Mbps is primarily used on entry-level models and older phones, 100 Mbps is used on entry-level and mid-range phones, and 1000 Mbps is available on mid-range and executive class phones.

If 10 Mbps is sufficient for just about any VoIP user, then why do higher options like 100 Mbps and 1 Gigabit exist at all? The answer has to do with the progression of network technology. 10 Mbps is relatively outdated on routers, switches, and other network devices, and few ISPs offer 10 Mbps internet plans.

Furthermore, Ethernet cables for 10 Mbps are becoming harder to locate, due to a dip in production. A VoIP phone with just a 10 Mbps Ethernet port runs the risk of incompatibility, or poor optimization, with your network. If you're running apps, video calls, and other web-based features on your 10 Mbps phone, the bandwidth may be insufficient to run all of these services.

Issues may also arise if you choose to use your VoIP phone as a network switch. Under this arrangement, you plug your computer into your VoIP phone with an Ethernet cable. The phone, which is already receiving an active internet connection, can in turn pass that connection onto the computer. 10 Mbps is fine for just VoIP calls, but for web services such as email, web surfing, and streaming video, your connection can suffer. 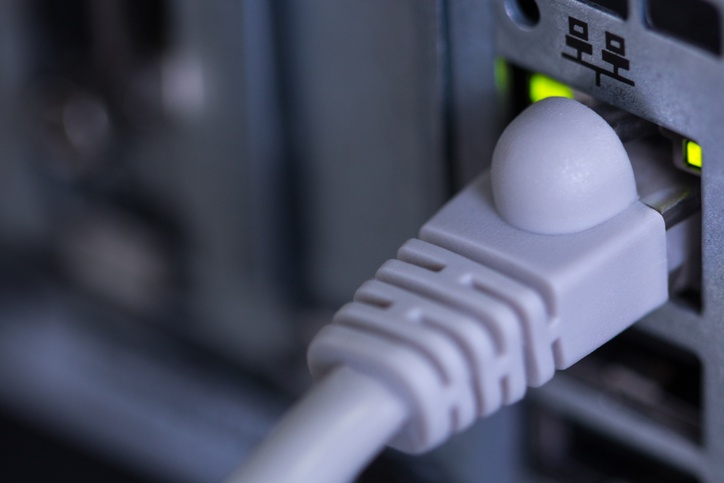 The question, again, is not about whether 100 Mbps ports can handle your calls calls. Rather, it's about network optimization. Compared to 10 Mbps ports, 100 Mbps ports are easier to setup up. For one, 100 Mbps Ethernet cords are still widely produced. Most routers, switches, and other network hardware readily support 100 Mbps. A 100 Mbps connection is typically sufficient for the needs of a small to medium business.

If you decide to use your VoIP phone as a network switch, a 100 Mbps Ethernet port will remain about 10 times faster than 10 Mbps. This difference will be noticeable when your computer is using web services. 100 Mbps will also allow you to use apps, video calls, and other web-based services without serious disruptions.

A Gigabit Ethernet port is 10 times faster than 100 Mbps and 100 times faster than 10 Mbps. There's no question that a Gigabit port can handle your phone traffic. As the latest entry in consumer network technology, Gigabit hardware, cabling, and bandwidth will be around for the foreseeable future.

Acting as a network switch, Gigabit phones provide superb internet connections for personal computers. Gigabit ports are also backwards compatible with 10 Mbps and 100 Mbps Ethernet ports, so plugging an older device into such a port doesn't impact the performance of Gigabit devices connected to the same switch. A Gigabit phone is ideal for using apps, video calls, and other web-based phone services.

What Ethernet Speed Does My Phone Need?

It's rare to find 10 Mbps network ports or switches these days, and it frankly doesn't make much sense to seek them out. A VoIP phone would have to be old and outdated to have only a 10 Mbps port, so that's a sign to avoid the device altogether.

VoIP phones with 100 Mbps ports, and increasingly, Gigabit ports, are the de facto standard for the industry. The calling experience will not differ much between a 100 Mbps phone and a Gigabit phone. The choice between the two ports really comes down to how much future-proofing matters to your network, since most routers and switches are moving exclusively to Gigabit ports.

If you can get a Gigabit phone at a good price, it might make some sense to purchase it over a 100 Mbps phone, especially if you plan on using apps, games, video calls, and other web-based services. However, if the Gigabit phone is significantly more expensive, you'd basically just be paying more money to have the same calling experience. See our Polycom VVX comparison series for a sample breakdown of popular phone models by port speed.

Power over Ethernet: PoE vs PoE+

Power over Ethernet (PoE) is a technology that allows you to power your device with an Ethernet cable, instead of an A/C adapter. PoE works by injecting a tiny electrical current into an Ethernet cable by a router or a similar device. When these cables flow to a PoE-enabled Ethernet port on a VoIP phone, the phone is powered on.

There are two types of Power over Ethernet: PoE and PoE+. PoE is the standard version found in most VoIP phones. PoE+ is a newer and slightly more powerful version of the technology. PoE and PoE+ both:

PoE+ devices can also be connected to standard PoE switches or injectors found on routers. When this happens, the PoE+ device will restrict how much power it uses accordingly, but will still receive PoE level power. Similarly, PoE devices can be powered by routers with PoE+ injectors.

Do I Need PoE on My Phone?

Not all phones support PoE, but it's a nice feature to have, especially if you have many users, cords, or devices at your office. There's no right or wrong PoE option when it comes to purchasing phones. The only thing you might want to consider is if the phone you're purchasing requires PoE+. In that case, you'll want to make sure that your router or network device can deliver enough current to charge the phone fully.

PoE support and Ethernet speeds can affect your VoIP experience no matter what type of business you manage. PoE can conserve space, save on installation and maintenance costs, and make setting up your phone system easier. Ethernet speeds between 100 Mbps and 1 Gigabit will give you the kind of call quality and reliability your business phone system needs.

While your phone's Ethernet ports might seem like a small consideration, they can play a role in how your hardware is deployed and what type of phone service you experience. These features may not necessarily be as important as HD voice quality, number of SIP lines, phone design, or feature functionality, but they are something to consider the next time you're shopping for a phone. For in-depth reviews on leading VoIP phone models, check out our phone reviews page.

Will My Call Quality Drop When We Switch to Business VoIP?
Is a Phone System Necessary?
Learn more about VoIP Fundamentals