What the Copper to Fiber Landline Transition Means for Your Business

Landlines as we know them are officially sunsetting. What does the copper to fiber swap mean for your business phone service? It means switch to VoIP!

Landlines as we know them are retiring. It’s not that they’re going away entirely, it’s just that they’re getting a hardware update more than a century after the first copper wires were strung up across the country.

The copper-based infrastructure behind the PSTN requires regular repair, and the fact of the matter is that manufacturers have stopped making the old technology required for fixes. On top of that, technology has evolved. We’d say that’s an understatement, but there’s a bigger understatement coming later in this blog. By now, we all know that fiber optic cables are the norm. Even if you don’t have a literal cable company, we’ve all seen the Verizon ads over the last couple of decades pushing their expansion. It’s time for copper landlines to get a full makeover to meet modern data and Internet demands.

Now, before you think this is a recent development spurred by the pandemic’s forced switch to online communications, it’s not. Telcos announced official plans to retire copper in 2019. Anyone who’d attempted to get landline repair for a while could tell you that announcement wasn’t exactly breaking news.

In fact, the New York Times covered the science behind copper into fiber all the way back in 2004. Reading that article is like opening a time capsule: Installing fiber was a huge risk, and no one knew if it would catch on or not. Dial-up modems were still a thing!

“For all the billions of dollars Verizon and the other Bells plan to spend, success is far from assured and failure could be catastrophically expensive. Cable providers, with lines into 73 million homes, are a formidable opponent, particularly with their new Internet phone services. And it is not certain either that the Bells will be able to offer fiber-based services compelling enough to get customers to sign up, or whether future technologies will render all that expensive fiber obsolete.” –NYT

Long story short, the world’s been shifting to digital for a long time. Updating the infrastructure is just time-consuming. Unfortunately, the pandemic also reminded us how hard it is to expand physical infrastructure, as much of the country had sub-par Internet connections for stay-at-home learning. While we’ve come very far from 2004’s 146,500 fiber-connected homes, we have a long way to go before the whole country has reliable Internet, let alone fiber.

While both options send signals along wires, there are fundamental differences in how they function. The legacy system sends electronic signals along copper wires. Fiber uses optic (light) signals—hence the name, fiber optic. Let us de-jargon for you: Fiber basically works because of lasers. Isn’t that a much more fun definition?

To put it in some historical tech context, radio and TV broadcasting worked through beaming electromagnetic waves from the base transmitter to receiving antennae. Radio still works that way—it’s why cars still have antennae. But for television, we’re just as likely to get TV signals through fiber optic cables. (If you’re now having horrendous flashbacks to old cable installations, we’re sorry and we empathize.)

In sum, we went from analog to digital in nearly every aspect of our technological lives. Telephone infrastructure is just the latest to catch up across the board.

Besides the obvious “update technology” aspect, there are a number of reasons for the switch from copper to fiber. First, the aging copper network requires a lot of maintenance. And describing that network as “vast” is a gross understatement. And, and, and—the list of benefits goes on:

Fiber optic cables are made of many glass or plastic strands inside a single cable.They bounce light signals back and forth all along the cable, and we all know light speed is faster than anything. Back in 2014, fiber cables set a world record for data transfer, hitting 43 terabits per second. As a result, fiber optic cables can send data 10 times farther than copper before needing signal amplification.

Because fiber cables transmit signals with light, the transmissions don’t need to be reinforced as frequently as copper landlines. They can handle more with less support, so latency goes down. 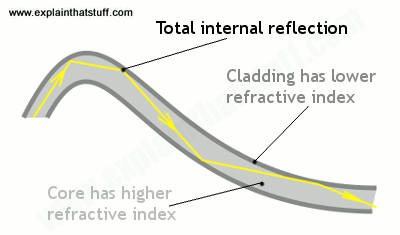 Yes, fiber cables can be tapped too but not half as easily as copper wires. Sorry to all of you old school spy fans, Le Carre might have to update Smiley’s methods for future books.

Fiber can withstand a lot more than copper. From weather to electromagnetic interference, fiber cables keep trucking without distortion, loss of speed, or other forms of signal interference that result in data loss.

If we’re talking about landline updates, then how does VoIP come into play? Well, we already know that VoIP has loads of advantages over the PSTN. Fiber’s advantages over copper are quite similar.

We have a detailed breakdown of the technical differences between VoIP and landlines in our What Is VoIP blog, but here’s a quick summary:

PSTN calls were connected through switchboards, and each copper wire handled a single call at a time. Early Internet connections were the same: If Mom was on the phone, you couldn’t dial up to the World Wide Web. With the onset of cellular phones, high-speed DSL, and fiber optic networks, the clunky and expensive POTS (plain old telephone system) prepped to embark on a ship west to the Undying Lands.

VoIP, on the other hand, has a lot more in common with fiber optic networks. So in a way, even POTS is technically switching to VoIP with copper’s end of life!

Cloud VoIP is significantly less expensive than both the PSTN and on-premise IP PBX systems. With hosted VoIP, a provider like OnSIP handles system maintenance and functionality. All you need is a solid Internet connection and your device of choice—whether that’s VoIP desk phones that simply plug and play or a softphone like the OnSIP app on desktop, web browser, or mobile phone.

Unlike copper, each VoIP “line” can handle multiple calls. On top of that, latency is much improved because there’s no need for switching stations at regular intervals to connect geographically distant calls. And the best part of all? It takes practically no time to set up business VoIP at work, no matter how dispersed you are. We said farewell to copper lines in the workplace a long time ago, and we’re more than ready to welcome everyone else to the VoIP world.

What Is PCI Compliance, and Why Is It Essential for Cloud Phone Systems?
SIP Video Calling: Ten Years Later
Learn more about VoIP Fundamentals