Should you use a business softphone app on your smartphone instead of its native dialer when making work calls? The short answer is yes—here's why.

Your smartphone is great for making everyday phone calls, texting, taking photos, and more. When you need to take a business call, however, there are features that your native dialer simply doesn't support. Softphones, or software phones, are designed to offer an alternative to your standard smartphone dialer with critical business features, including multi-party video conferencing, attended transfers, call recording, and more.

Softphones are essentially phone apps. They attempt to bring all the power of an office deskphone onto a computer or mobile device. You can download or purchase them in app stores for a wide array of devices. In particular, softphones for iOS and Android operating systems have proliferated recently. OnSIP currently offers a comprehensive mobile app for free to OnSIP users, downloadable from the Apple Store or Google Play Store.

Here are 5 business calling features a softphone app has that aren't built-in to your smartphone.

Your regular smartphone interface can allow 3-way calls, which is fine for personal use but can be limiting for business calls. When you need to touch base with multiple team members, a softphone can offer additional capacity. Most softphones offer 5-way voice conferencing as well as 3-way video conferencing.

While there are third party apps just for conferencing, it can be hassle to get everyone to download and use it. There's also the chance that the service will be billed separately from your office phone provider. That's why having multi-party voice and video conferencing in one app can save your team both time and money.

For example, a manager needs to double-check that the flyers and banners shipping to a conference she's attending have the same logos. To quickly verify, she initiates a 3-way video conference using OnSIP's mobile app with her two team members in different office locations.

Call recording has many business benefits, from enforcing quality control to proving compliance with industry regulations. However, this functionality isn't typically built in to smartphone interfaces. While there are standalone apps for recording audio, setting up automatic call recording can be difficult.

With a softphone app, you can easily set up call recording for all calls to your business line. The function is also usually part of the softphone dialer itself, so you don't have to burrow through several menus to enable it. Recorded calls are saved locally and you can access them either on the phone or in an app like iTunes.

For example, a sales team manager allows several employees to work remotely for the holidays. By using Zoiper for iPhone, his team can record all inbound calls to the sales line, just as they do in the office. The manager is able to continue reviewing all calls for quality assurance and can assess the efficacy of their remote working. 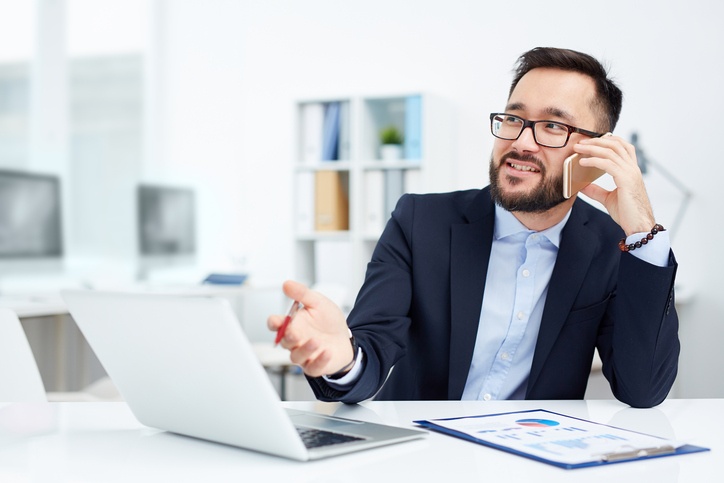 A large part of business calling involves routing and re-routing callers to the proper destination within your company. Being able to use employee extensions to initiate transfers saves you from having to redial numbers, reduces fat finger dialing, and saves time for the caller who's waiting on the other end of the line.

Smartphones don't come with call transfer functionality. The feature can only be accessed through a third party app. See a trend? A softphone app makes it easy to initiate a transfer to a co-worker in your business Contact Directory. You can also choose between a blind transfer or an "attended" transfer. This is when you place the caller on hold, call the transfer destination, relay a message to describe the incoming transfer, and then connect the on-hold caller to the transfer destination.

For example, a customer calls the direct sales line for your business instead of the support line. A sales employee answers the call using SessionTalk for Android. After understanding the customer's request, the employee makes an attended transfer to a co-worker in the support department.

Scientific American made the following observation in an article, "Why Is Cellphone Call Quality So Bad?", last year: "In the age of social media, texting, mobile e-commerce and video streaming it’s easy to overlook an experience hasn’t gotten better for smartphone users: talking on the phone."

Despite this complaint, many smartphone manufacturers claim to support HD voice, a quality threshold that's at least twice the audio quality of landline voice calls. The problem actually isn't the devices, it's the networks they're using. The cell networks of Verizon, AT&T, and other major players lag so far enough behind that HD voice support directly from a smartphone is often a token gesture.

Softphone apps, on the other hand, support HD voice audio codecs. Granted, there are gradations in calls made over 4G and calls made directly from WiFi. But when compared to standard cell-to-cell calls, cellular VoIP calls offer higher voice quality. Top softphones such as Bria even offer other support for "wideband" codecs besides G.722, such as OPUS and SILK.

For example, a woman working from a rural area with bad cell coverage uses OnSIP's mobile app over her home WiFi connection to achieve HD voice. This allows her to hear her clients clearer. As a result, the voice quality is higher on both ends of the call.

How much do you need to hack the average cell phone call? $15 dollars and 3 minutes, according to a demonstration Security Research Labs pulled off a few years ago. They used a $15 dollar phone, a laptop, and open source tools to listen in on a conversation.

Perhaps one of the most overlooked differences between smartphone interfaces and softphones is found in the domain of cybersecurity. Smartphone calls are weakly encrypted, and according to demonstrations like this, even unsophisticated attacks can intercept call audio and valuable metadata. Many VoIP-based softphones seek to rectify this by adopting TLS, SRTP, and ZRTP encryption.

Taken together, these encryption protocols protect softphone calls from illicit forms of snooping and surveillance. When compared to the native dialer, any phone app that attempts extra encryption is more secure.

For example, an engineer working for a defense contractor is working from home but needs to discuss confidential information over highly secure channels. Instead of setting up a secured deskphone, he uses CSipSimple for Android, which uses the high-grade ZRTP encryption protocol.

The common refrain throughout this blog has been that third-party apps are often needed to enable enhanced business calling features. Softphones aim to condense these "advanced" features under a single roof. Otherwise, you would need separate apps for call recording, call transfer, conference calling, and so on.

Besides these features, softphones also allow you to connect to your business phone system as if you were still in the office. You can extension dial coworkers, use presence, and generally get the full business calling experience with a robust features set.

Most important of all, perhaps, is that you won't be charged to use a softphone that's registered to your business phone system. All calls to and from your softphone will be billed to your business, at cheaper per minute rates than your cellphone. And calls to your coworkers are free.

In all, the native smartphone dialer is great for personal use. For business calling, you might be better served with a softphone app.