How Many Phone Lines Do We Need?

In this post, we look at different interpretations of a VoIP line (such as one phone line, multiple extensions) to help you determine how many you need.

A 'phone line' is an old term that comes from traditional landline phone systems. However, in an era where most businesses use a hosted VoIP service, this phrase is used in many different contexts. In this blog, we'll examine a few different interpretations of a 'phone line' and help you answer the critical question: How many phone lines do you need in your office? If you're looking to understand how to setup one phone line, multiple extensions—you've come to the right place.

What Is a 'Phone Line' Anyways?

'Phone line' and 'line' were well-defined terms in the not-so-distant past. In relation to a landline phone service, a line is a physical wire in the wall that allows each phone to receive inbound/outbound calls. With a landline system, each office phone requires one of these physical lines to receive phone service.

'Phone line' has been used for so long, it's simply entered the English language as a popular phrase. But VoIP phone systems don't use 'phone lines' in the traditional sense of the term. As such, a 'line' has come to mean many different things in the VoIP world. 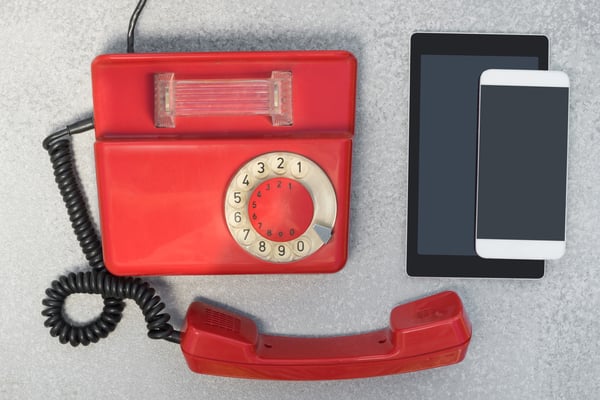 So how many phone lines do you need in your office? This largely depends on how you're using the word 'line'. The questions below will help define what a line means to you.

Let's look at each scenario.

If you're referring to 'lines' as the number of employees in your office, then you're talking about the number of 'users' or 'seats'. In this scenario, each user typically has a phone and a unique extension, with the option of additional features like a voicemail box, call forwarding, and music on hold. This is how you can achieve one phone line, multiple extensions.

Certain institutions may refer to 'lines' as the number of physical phones they need. This is usually the case for facilities such as schools and hospitals, where phones are apportioned per room, and not necessarily per person. Employees who frequently travel between offices may also have a desk phone at each location. In this case, the number of devices is greater than the number of users.

Some VoIP providers allow multiple registrations to the same user, such as an office phone and a mobile softphone app. Both of these phones are 'assigned' to the user, and an administrator can set up call forwarding rules between them. If this is the case, you'll need fewer seats than the total number of devices registered to your network.

Sometimes people use 'lines' to refer to the number of inbound/outbound calls an organization can take at one time. With a hosted VoIP solution, there are certain services that limit the number of concurrent calls you can make. But there are also services that allow for a high or unlimited number of simultaneous calls.

The maximum amount of simultaneous calls matters very much to call centers, support/sales queues, and other high volume call operations. Since these groups receive a large amount of inbound calls, and because their business models depend on reliable service, they tend to view 'lines' from a simultaneous calls perspective. If you're considering unlimited pricing plans, make sure to review the terms and conditions to see how many simultaneous calls per phone number your plan includes.

Traditionally, each office location needed a unique phone number. With VoIP services, multiple locations can share the same phone number with extension dialing. For example, you can setup an auto attendant that asks the caller to select which location they wish to reach - 1 for New York, 2 for New Jersey, etc.

Of course, there are cases where a business prefers to operate with multiple public numbers. In this case, the number of 'lines' you need is simply the quantity of phone numbers you wish to have.

How Many Phone Lines Do You Need?

As you can see, a ‘phone line’ can mean many different things depending on the context. In most cases, you’ll be referring to the number of phone numbers your organization needs. The other interpretations refer to details like the number of registrations per user and the number of simultaneous calls per phone number.

When researching VoIP providers, choose one that offers the most flexibility for the lowest cost. For example, a provider that allows for a high or unlimited number of simultaneous calls per phone number and multiple registrations per user means you'll be paying for fewer phone numbers and users. Depending on your call traffic, you may only need one phone number.