Coast Personnel Services required a phone system that could meet the challenges of a multi-site business.

Coast Personnel Services is a staffing company with clients across the United States. Their services include recruiting direct hires, payroll for long-term and short-term employees, on-site personnel management, and temporary employee placement.

Like any geographically diverse business, Coast Personnel was faced with the undesirable task and monetary burden of installing traditional on-premise PBX phone services every time it opened an office in a new city. “We need to be able to go where our customers are,” says Morgan. “We can't wait around for the local telecommunications provider to provision a phone line.” Astronomical telco bills, unwieldy systems, and too many manufacturers all called for an upgrade.

OnSIP was just what Coast Personnel needed. “With OnSIP, we could provision new voicemail boxes, phone numbers, and phones immediately without dealing with a telco. Being able to manage the phones directly from the OnSIP administrative web interface makes supporting branch offices much easier.”

Fundamental improvements in service were obvious from the start. “Basic sound quality was noticeably better than some of the competitors we tried,” says Morgan. “I also appreciate OnSIP's transparency. The blog and the knowledgebase give us a lot of visibility into what's going on 'under the hood.’ The support staff is very knowledgeable and communicative.”

When Morgan joined the company, one of her main objectives was to modernize their telecom strategy, specifically through VoIP. Since Coast Personnel was founded before the dot-com era, it’s a mission of theirs to leverage technology to bridge the gap between employers and job seekers.

Going forward, Coast Personnel plans to expand to more cities across America, and OnSIP will remain the backbone of their communications infrastructure. “From my desk in Santa Clara, I can see what's going on with phones in North Carolina,” Morgan says. That sort of geographical leniency is crucial to all businesses that want a unified phone network without costly on-premise PBX services. 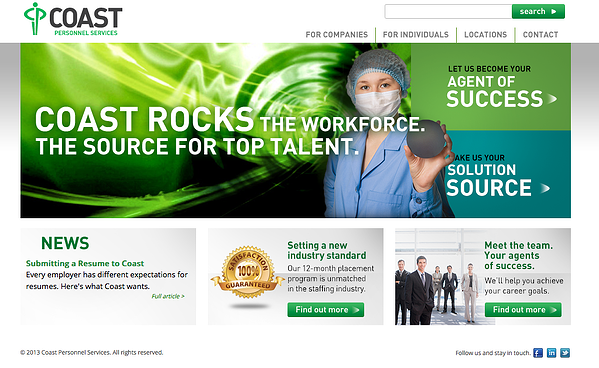 Being able to oversee all phones scattered across the country is one of Morgan’s favorite features.

“The control and visibility that the administrative web portal gives us over extensions and phone numbers are remarkably advantageous in our field.”

Morgan was surprised to find how much the granular control over call routing has helped the company. When a recruiter needs to travel suddenly, she can forward calls to his cell or to another colleague, even if that colleague is in a different time zone.

Coast Personnel uses Polycom SoundStations with OnSIP provisioning. Because they can manage everything from OnSIP’s portal, supporting branch offices has become considerably easier.