Despite its subdued design, the Cortelco C62 is an affordable SIP phone that offers a variety of leading features.

Note: The C62 has since been discontinued.

The Cortelco C62 marks the company's foray into executive IP phones. Unlike the Cortelco C56, a product that pared down its capabilities as much as possible, the C62 takes a slightly different approach by offering features that are common to most mid-range phones (multiple lines, more BLF buttons).

The Cortelco C62 maintains the same minimalist design that its other phones are known for. The plastic feels hollow to the touch, and the phone is clearly not going for the smartphone aesthetic that's currently chic with other leading brands. This is a good old-fashioned desk phone, and its refusal to adopt contemporary design trends is actually somewhat endearing once the phone is up and running.

The buttons appear somewhat jammed together, but upon further inspection, this arrangement serves its purpose well. It allows for a smaller phone frame, which in turn makes the C62 one of the most portable phones we've ever reviewed. Setup time, from unboxing to startup, could take as little as ten minutes. Additionally, the smaller real estate eats up less space on an employee's desk.

The user interface of the C62 is similarly pared down. As with other Cortelco phones, the C62 bears a UI with four functions: History, Directory, DND, and Menu. Within the Menu, options for SMS capabilities, voicemail setup, phonebook storage, and other features are available. The graphical interface itself seems like a mainframe screen from some outdated computer movie from the 1980s. But it is clearly function over fashion with Cortelco, and C62's interface gets the job done.

The C62 boasts many features that are standard for mid-range IP phones. With eight BLF buttons, the C62 nearly doubles the number found on its little sister, the Cortelco C56. Directory, History, Redial, and Speakerphone are all buttoned features placed on the far right of the frame. The buttons on the number pad feel somewhat stiff, but they never malfunction.

Perhaps the most improved feature with the C62 is its inclusion of four phone lines. This is a big uptick from the C56's limited offering. The lines can be toggled by the four buttons in the top right corner of the phone. Each time a line is changed, the account is displayed on the corner of the screen.

Menu features include contact directory (with speed dial and blacklist), do not disturb, call forwarding, auto answer, auto dial, call waiting, intercom, pre dial, and several more. It would have been nice if some of the more popular features were included as buttons on the phone. Nevertheless, the range of features is impressive and eclectic (ban outgoing calls, anyone?), and there's certainly a depth to the features here that other phones seem to lack.

Applications include SMS, Memo, Voice Mail, and Ping. Overall, the features for the C62 are quite impressive for a mid-range phone. It's simply the way they're presented—as menu options in an unvarnished UI, rather than physical buttons—that makes the phone a little harder to use. But as with all things Cortelco, the design choice is clearly calculated to align with the lo-fi ethos the company strives for.

The voice quality for the Cortelco C62 was clear and intelligible. The voice depth does not compare to leading options such as the Panasonic KX-UTG300B, but for the purposes of day-to-day business interactions, the quality is solid enough for easy communication. There was no echo feedback or other disruptions that caused significant comprehension impairment.

Remember that when phone manufacturers refer to HD voice, they are referencing the distinction in comparison to the Plain Old Telephone Service (POTS). When compared to other VoIP phones, the phrase does not bear any qualitative weight. In this sense, the Cortelco C62 has an obvious voice advantage over landline phones, but it falls somewhere in the middle of the pack (slightly better than the Cortelco C56) when weighed against other VoIP phones.

The call must be transferred correctly to C. B must be released correctly after the transfer. When C picks up, audio must work both ways between test phone and C. When the test phone is on hold, there is no audio between it and phone B.

We did not experience any issues during our tests with the Cortelco C62.

Step 2: Log into your Cortelco phone through a web browser.

When your phone is powered on and connected to your LAN, use a browser to navigate to the IP address of your phone (found via the "Sysinfo" button).

For most setups, you will need to simply configure "Account 1." If you are trying to configure multiple users or multiple line appearances, you can repeat the steps below for each of the identities you are configuring. Log back into the phone and navigate to the VoIP tab on the left. Enter the information as outlined above and then hit the Apply button. The phone will reboot.

When the phone is up, log back into the phone and navigate again to the VoIP tab. This time select Codec Settings.

Select the codecs to match our screenshot below. 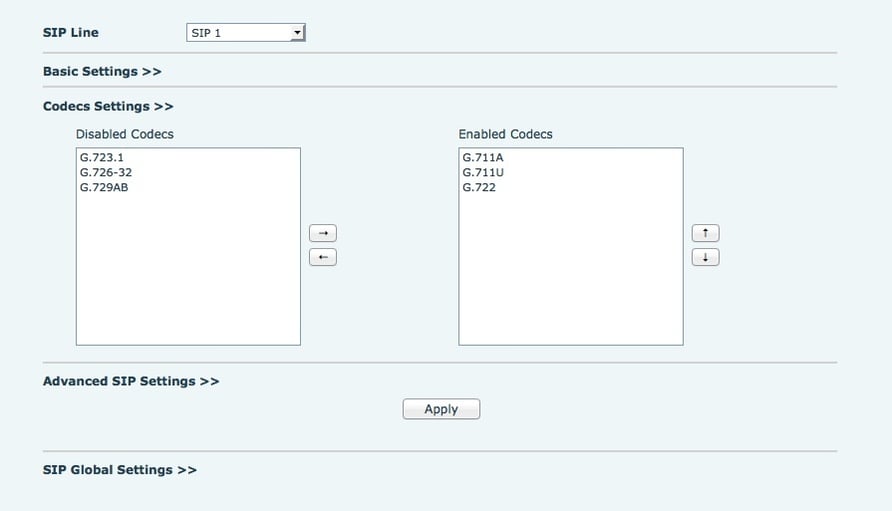 Scroll to the bottom of the screen and click the "Apply" button.

Step 4. Confirm that your phone is registered.

The Cortelco C62 is a sturdy mid-range phone with sterling voice quality and a library of impressive features. Many of these features are not included as buttons on the phone, which is a minor hassle in some instances. But overall, the phone is perfect for those who want a no-frills device that preaches substance over style. The Cortelco C62 packs a punch where it counts, and despite looking like a watered-down SIP phone, it actually proves to be more capable than some of the other similar options on the market.

One of the most appealing features about the Cortelco C62 is the price itself. At $60, the C62 does what phones twice the cost can do. It might not be wrapped up in the prettiest package, but the C62 gets the job done for those who need a phone that clocks in above entry level. With the great price point, depth of features, and decent voice quality, the phone will work well for front desks and small offices looking to furnish an affordable solution. See our Knowledgebase for Cortelco configuration details.