With three branch offices located in New York, New Jersey, and Pennsylvania, as well as a handful of remote employees who work from other states, OnSIP holds many company conference calls each week! Because of this, we’re always interested in trying out different VoIP conference phones during our calls.

One of the latest models that we’ve tested is the Polycom Trio 8500, a device in Poly’s Trio series of VoIP conference phones. For years, we used the Polycom Soundstation IP 7000 in our conference room, and so we had high expectations for this phone. Read on to learn more about our impressions of the device and how it fared in our conference calls.

Poly’s wide variety of desk phones, conference phones, and DECT phones are some of the most consistently dependable VoIP phones you’ll find on the market. The Polycom Trio 8500 is a worthy addition to their storied line of phones—even boasting integrations with some of the most popular business apps out there today.

At first glance, the device has a good physical design, with one of its three arms holding the LCD touchscreen and the others holding the phone’s speakers. At the bottom of each arm are mute buttons that allow anyone sitting around the phone easy access to mute the microphones. The device itself feels solid and dense, not at all like the hollow, lightweight plastic of some other conference phones.

The LCD touchscreen has bright buttons, and we encountered no surprises or snags in navigating the interface—an expected outcome since it’s powered by Poly’s well-established and advanced software.

Poly’s website states that the Trio 8500 is ideal in medium-sized conference rooms for 6 to 8 people, but we regularly used the phone in conference calls where 10+ people were on the call and the device performed admirably. 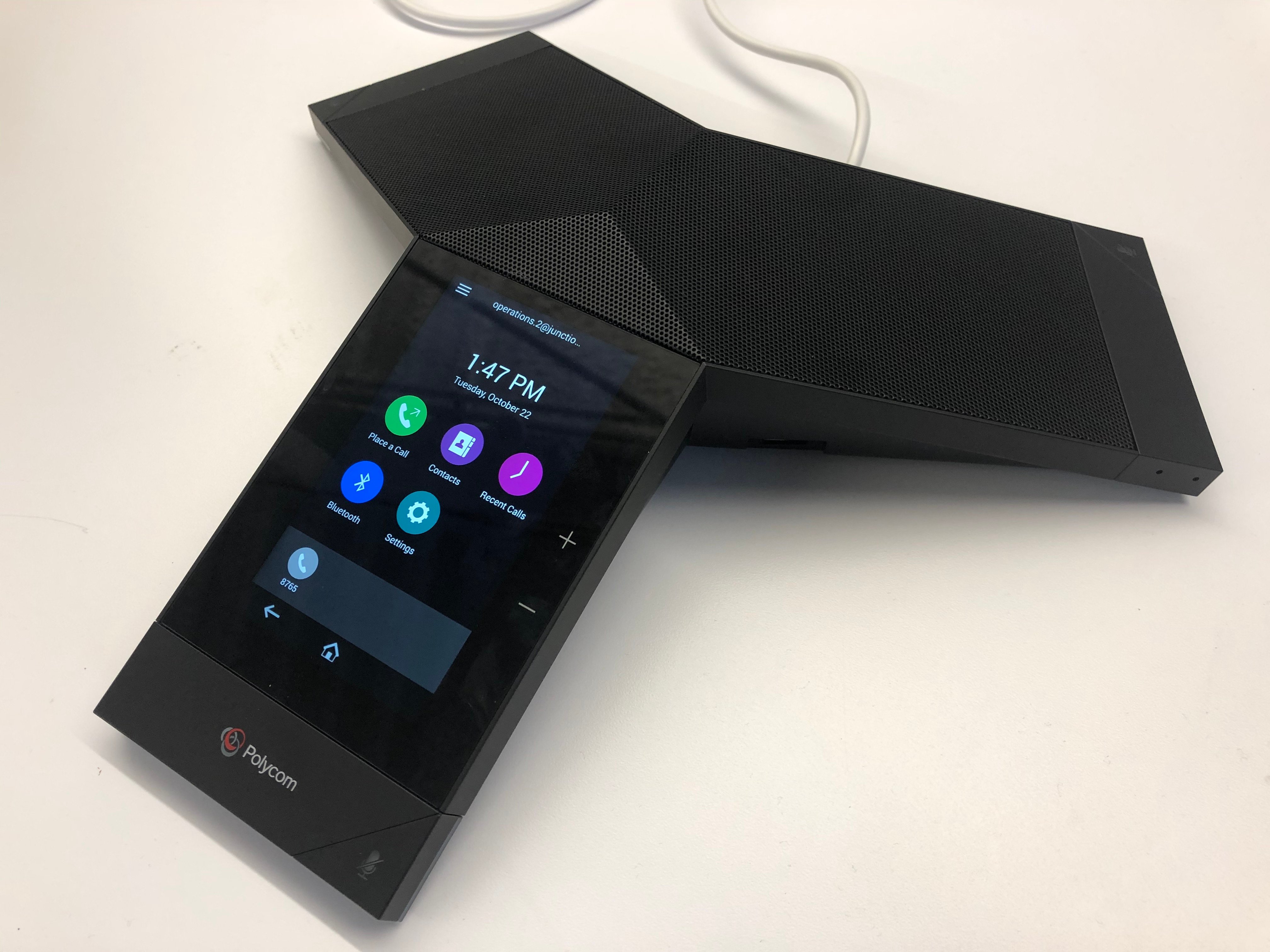 The call handling and technical features on the Trio 8500 include:

As far as audio features go, you can expect to find:

Power for the phone is provided by a built-in auto-sensing IEEE 802.3at. PoE device, but an optional power kit is available that includes a power cord and network cable.

One of the headlining features of Trio 8500 is that it is “Skype for Business certified,” providing a seamless connection between the desktop client and this conference phone.

The microphones on the 8500 were able to pick up employee voices even at the ends of our conference room, while still being smart enough to focus on voices that were closer to the device.

However, we did feel like the actual sound quality of other voices that were coming through the phone was lacking a bit, especially when compared to other conference phones that we’ve used that were also running G.722.

The speakers on the Trio 8500 are strong. In our usage, we found that you could raise the volume pretty loudly and not encounter any distortion. And as an aside, the conference phone is equipped with oddly good bass. We also found that our hold music coming through the speakers was strikingly rich and vibrant!

Call must be transferred correctly to C. B must be released correctly after the transfer. When C picks up, audio must work both ways between test phone and C. When test phone is on hold, there is no audio between it and phone B.

As expected from another Polycom phone, we had no issues with interoperability with the Polycom Trio 8500. The phone was very easy to set up on OnSIP’s bootserver.

It’s important to note in our review of the Trio 8500 that we focused on testing it as a conference phone and did not try out its connections with Skype for Business or Office 365. The Trio 8500 can be the center hub of a very advanced business teleconference suite—but that was not in the scope of our review for this device.

That being said, we found the Polycom Trio 8500 to be a good and dependable business conference phone. While the speakers are powerful, the interface is very user friendly, and the physical design is sturdy, a couple aspects of the phone led us to give it an overall rating of 4 out of 5 stars. If you don’t plan to use most, or all, of the supported features of the 8500 (most notably the connections with Skype for Business or Office 365), it is a very expensive conference phone. If you just need a phone to host conference calls, you will find less expensive devices that may better fit your particular needs.

We also found that the lack of detachable microphones from the main base of the Trio 8500 was a drawback in our own use of the conference phone. You can get expansion microphones that are compatible with the Trio 8500 and 8800 conference phones; however, they are sold separately (adding to the overall capital investment), and they are wired mics. The 8500 is a great phone for medium-sized conference rooms, but even using the wired expansion mics wouldn’t give us the flexibility needed when we have full conference calls. Over the years, we’ve come to rely on detachable mics when we need to accommodate staff members who have to sit alongside the room’s windows or side walls during a call. Adding detachable mics to this phone will definitely help improve its overall usability.

Overall, the Polycom Trio 8500 is another high-quality VoIP phone developed by Poly. Just make sure that you can justify its costly price by implementing all of the supported features that it offers.