We've written on why VPNs are a good choice when using the Internet—now learn how they work to make your web connection private and secure.

A virtual private network (VPN) creates a nice private tunnel between you and your Internet connection. Inside this tunnel, no one can spy on what you’re doing. The VPN masks your IP address, meaning you can, on the surface at least, appear to be connected to the Internet from another geographic location. Your Internet connection routes through the VPN server rather than your Internet service provider (ISP). This means that your ISP can’t snoop on your activity looking for an excuse to throttle your bandwidth, and you can bypass geographic blocks on websites and content. And you can certainly feel more comfortable using free WiFi. Based on the VPN server location you choose, your IP address shifts to match the supposed location.

We all know what Internet protocols are; we just don’t pay them much mind because they function behind the scenes. VPNs have several protocols to choose from. Think of them like a mash-up of typical protocols (guidelines and processes for connection and data transfer) with security standards. Frequently called “tunneling protocols,” these are what create that private Internet tunnel for you. On top of that, the more secure protocols use encapsulation: They secure your encrypted data packets inside an extra outer packet. (Sort of like voting absentee—you put your ballet in one envelope, then place it into another envelope for mailing.)

The best protocol for you depends on your reasons for using a VPN. Do you need more speed? What about stronger security? The best stability? Each protocol has its pros and cons, as outlined in this handy Cactus VPN chart. 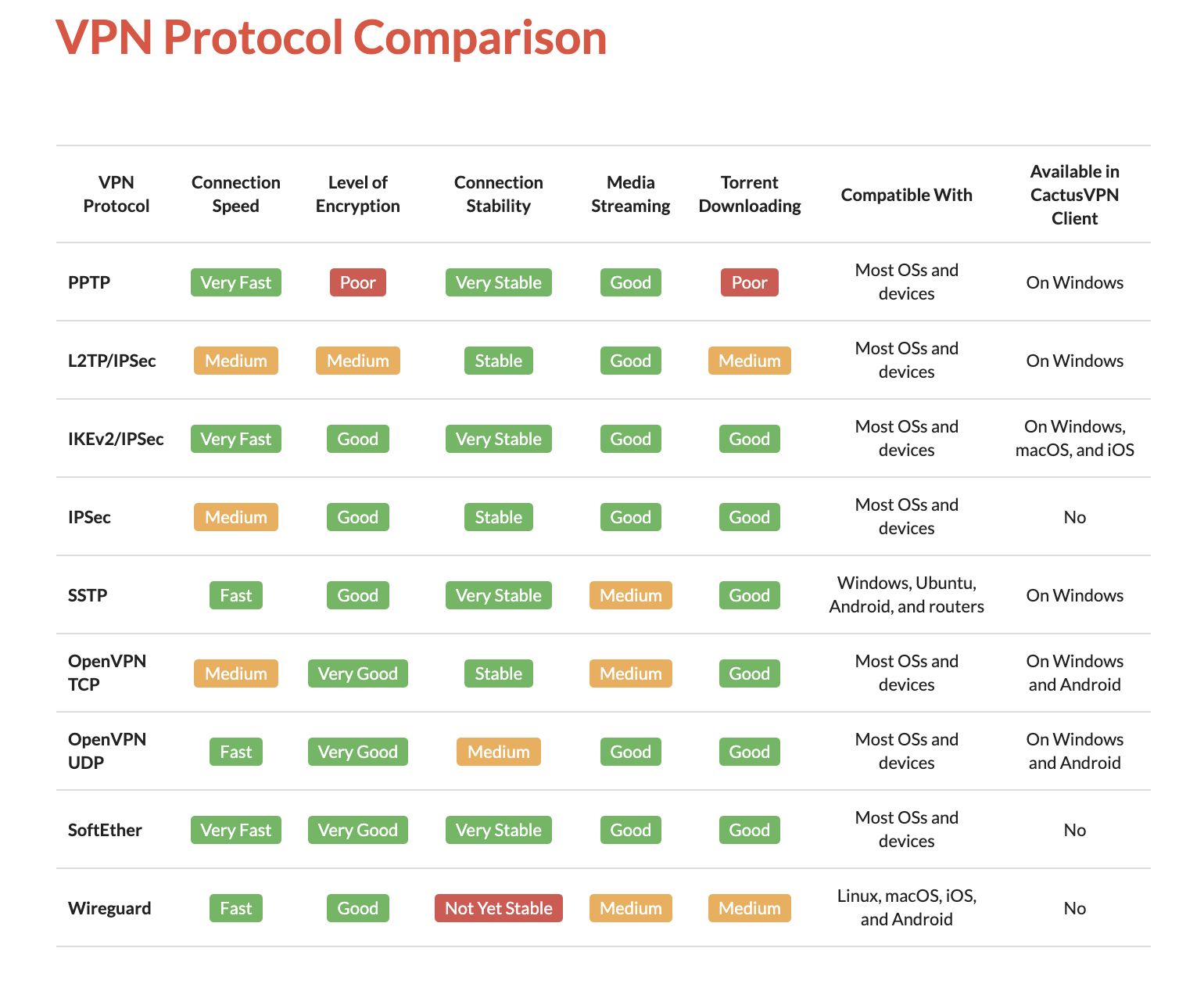 Some protocols are harder to configure than others, like OpenVPN or SoftEther. Some are just in testing stages and don’t yet work outside of Linux, like Wireshark. Some are old enough that despite general strength, newer operating systems removed compatibility, like the original PPTP. One basically runs on SSL/TLS, so your Internet activity looks just like HTTPS traffic.

If this is wrinkling your brain, don’t worry. Unless you’re setting up your own VPN, you likely won’t have to sift through the specifics of enabling each protocol. Most VPN providers have the main ones natively in their software, with options to switch to others if you so choose. ExpressVPN, for example, has an automatic setting that picks the best protocol in the moment but easily allows you to switch to IKEv2 or others with a click:

It takes a lot to truly hide yourself online. Put it this way—if you’ve ever had a social media profile, there’s no point trying to hide your IP address every time you’re online. There’s not much you can do to stay truly anonymous, as anything is searchable:

“Why hide your IP address when you post everything about your life on social media sites? I get questions all the time about ways to remain anonymous, etc. I look up the IP address from where the email came, I go to Google, I type in the senders name or email address, and almost 100% of the time, I find who this person is and what they look like within the first 10 results.”—WhatismyIP.com

But using a VPN can mask it for a while when you need it to, say to bypass nosy Internet service providers or geographic restrictions, which can come into play for VoIP users. Rather than connecting to your ISP’s server and using your assigned IP address, the VPN issues a new one. Many VPNs shift your IP address around every so often during your connection as well to increase privacy.

VoIP has many benefits over the PSTN (Public Switched Telephone Network), including significantly lower cost, increased mobility, and stronger security. So why would you use a VPN when VoIP calls already have end-to-end encryption? Well, for starters, extra security never hurts, especially when online. More to the point, many countries and traditional telcos put a great deal of effort into blocking VoIP. There’s a reason we call them telecom giants, after all; they’re big enough to lobby governments for laws in their favor. And blocking VoIP goes hand in hand with Internet censorship worldwide. It’s harder to monitor civilian conversations when they’re encrypted.

Before we start sounding too much like a Jason Bourne pitch, let’s give an example. OnSIP customers are based in the United States, but what if your employees are deployed around the globe or you have customers in other countries that may limit VoIP access? With a VPN, you can skirt around geographic restrictions because it masks your IP address.

Another perk of VPNs with VoIP: bypassing ISP throttling. Your Internet service provider likely does deep packet searching. Basically, they scan the data packets going to and from your IP address and can slow down your Internet if you’re engaged in high-bandwidth activities like streaming video.

As previously mentioned, the best VPN for you depends on your needs and priorities. Make sure the protocols available are the ones you want and that the VPN server locations work for you. VPNmentor has a great rundown of the best VPNs for VoIP, which you can read here.

Your choice also depends on mobile use: One of the best parts of VoIP is its ability to send calls to any device. In your research, make sure to check out the mobile stability of various VPNs. If you regularly switch between WiFi and a data connection on your mobile device, you’ll want a VPN with highly stable mobile protocols so that there’s no interruption in your connection.

What About Free VPNs?

There are free VPNs out there too. When it comes to security, however, we’ll always advocate that the free options never stack up to proper paid services. Besides, even the top-rated VPN services out there cost less per month than even the most basic Netflix subscription.

That said, you don’t need to commit right away. Like most subscription services, you can test out your options with a VPN free trial. So even if you’re on the fence about which particular VPN you want to use, you’re able to test drive each to get a better picture of their specific features and location options.

What Are Business Hour Rules? Send Calls to Different Destinations Based on Your Open/Closed Hours
What Is CCaaS?
Learn more about VoIP Fundamentals