Did you hear? 911 is switching to VoIP. It's called Next Generation 911 and it finally moves our emergency communications system from analog to digital.

As any VoIP fan knows, telecommunications has vastly evolved from the rotary dial and switchboard days. Unfortunately, emergency communications have been slow to adapt to modern technology—let alone keep up with it.

It’s weird to think of a time when calling emergency services required a full 10-digit number. But up until 1968, that was exactly the case! And it wasn’t a nationwide number either—you needed to know the local station’s info (or, quite likely, go through an operator). 911 as we know it, the single, nationwide number so easy to remember that kids can dial it, came about after a study on preventable deaths and injuries—particularly from car accidents—suggested a simple fix.

The biggest change so far on the layperson side came with E911. Enhanced 911 developed after mobile phones came into play. Before that, PSAPs (public safety answering points) knew the caller’s location because of the address associated with the landline calling in.

On the emergency personnel side, the biggest update came with FirstNet: A wireless network deployed nationwide dedicated to public safety officials. They can stay connected to each other in the field and get digital info from PSAPs without worrying about public channels getting overwhelmed.

But even with those advancements, 911 technology is still decades behind current communication norms. You can tap your phone a few times and have a cab show up to your exact location without having to know where you are. We’re so deep in texting that thinking about text limits is like opening a time capsule. Yet we still can’t do anything but call 911. No videos, no real-time data sharing, no way to relieve overwhelmed dispatch centers when too many people call in at once.

Enter Next Generation 911, or NG911, a project that is frankly taking so long to implement that it will likely be outdated by the time it covers the entire country. For context, it started in 2000. So technically, we can accurately say it’s taken the entire millennium and is still barely in place let alone funded. But it’s still a beyond-necessary update and has made some headway in the two plus decades it’s been in the works.

The idea is to switch the United States’s (and Canada’s) emergency response communications system from analog to digital. More precisely, it’s about moving the entire 911 system to IP-based infrastructure. This should sound familiar: In a nutshell, 911 is switching to VoIP. See? We told you this story is for VoIP fans!

Now, obviously this switch is long overdue, and we could easily spend the rest of this blog detailing the reasons why. But we’ll stick with a few key points:

So what does the new system change?

Unlike FirstNet, which was created with government oversight and funded by Congress at its outset, NG911 runs more locally. So don’t be surprised if you haven’t heard of it despite it being of legal drinking age. It’s implemented at the state, region, county, and municipal levels, which explains its rather patchwork status.

Essentially, NG911 finally invites 911 services to the smartphone data party. It digitizes 911 so it can receive all the rich data we’re used to sharing from our smartphones. Dispatchers can share this data in real-time with EMS personnel to help them better assist those in need. 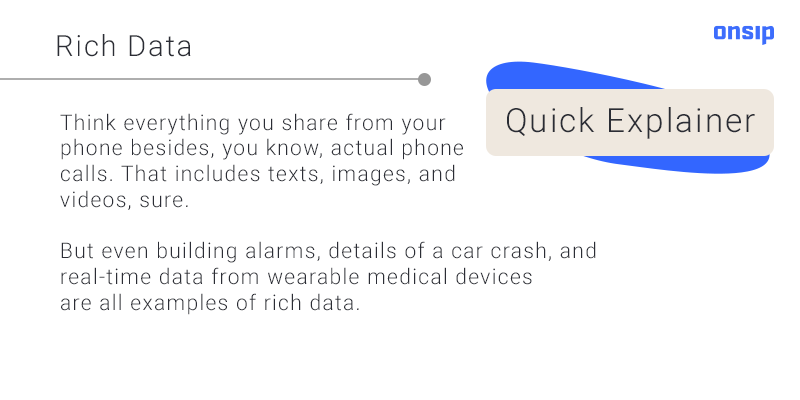 Additionally, NG911 heftily upgrades the system’s speed and resiliency which is always an important factor for digital communications. Besides faster communications and more info, it involves automatic load balancing when one PSAP gets overwhelmed with calls. We mentioned that above, but we particularly enjoy that it’s like they took a page out of OnSIP’s book. One system is suddenly overloaded? Not a problem, we automatically switch the communications to the next available location. For OnSIP that means servers, for 911 that means the next available 911 call center.

After several stalled attempts at solid federal backing for the system upgrade, it finally got pushed through in 2021 as part of the major Infrastructure bill signed into law in November. Multiple other bills are still stalled in Congress that would provide much more funding that is incredibly necessary, but at least 2021 saw solid (and bipartisan!) progress towards funding improvements.

A number of states already have NG911 implemented, but adoption is slow enough that 911.gov hasn’t updated its progress map since 2017: 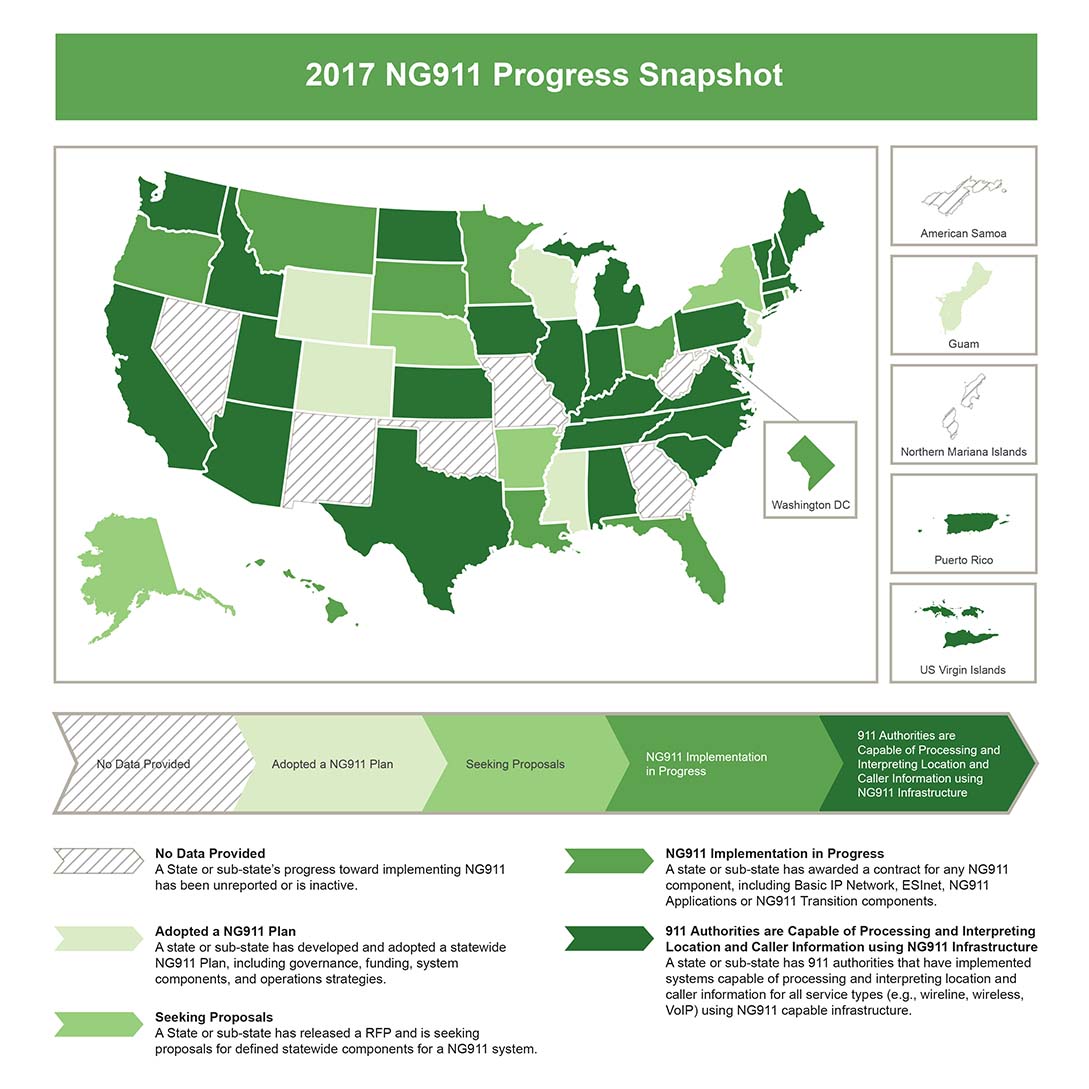 Hopefully, more infrastructure bills will make it through the Congressional gauntlet and NG911 implementation will see a boost nationwide. While there’s enough red tape involved to cover the landline cables across the country, we are happy to see progress happening.

The best way to find out if your area has NG911 is to check annual reports from your state or local government. We know, we know, it’s not ideal. But with luck, updates will be easier to track down as the system grows.