Codec Compromise is a Big Step towards Widespread WebRTC A decision on mandatory video codecs for WebRTC has been made. Here's who it affects.

Last week, Andreas Gal of Mozilla broke the good news that a compromise has finally been reached regarding video codecs for the standardization of WebRTC. This agreement comes after two years of debate and disagreement on which codec (mainly VP8 or H.264) to make mandatory, due to points like licensing fees and pre-existing compliant devices. To quote Gal on the outcome:

The details are a little bit complicated, but here’s the executive summary:

If you're an OnSIP user and currently enjoy the benefits of InstaPhone and InstaCall, you may be wondering how these decisions may affect you. The current capabilities of these apps are unaffected, but this decision brings new opportunities for interoperability. In the coming months, we'll be working to support H.264 for our current WebRTC applications, and will be testing video call interoperability with video-capable desk phones that already support H.264. We'll be sure to update you as we make progress. As for the big picture, this decision helps to solidify the belief that WebRTC is here to stay. 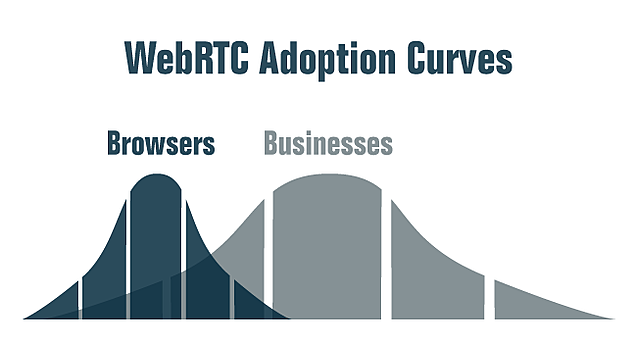 In September, I touched on the concept of a two-pronged adoption curve for WebRTC - where browser developers like Google, Mozilla, Microsoft and Apple needed to commit to WebRTC before we can expect businesses to fully buy into it. With Microsoft's previous announcement to support ORTC (casually referred to as "WebRTC 1.1", though still a point of debate) and The Great Codec War coming to an end, WebRTC is picking up speed on its way to standardization.

Becoming the standard for real-time communication in the browser would mean that any browser that wishes to be "standards compliant" would need to incorporate it. This includes Microsoft's Internet Explorer browser, which still has a stronghold on many large business, as well as Apple's Safari, despite Apple's silence throughout the WebRTC timeline so far. Adoption by these browsers, as well as Google's Chrome and Mozilla's Firefox which have both shown their support, would move WebRTC past the first adoption curve and more businesses would be confident enough to implement WebRTC solutions.

The work associated with supporting these codecs falls on the browser developers, but it's also expected to result in some additional work for WebRTC vendors and anyone else developing with WebRTC. As OnSIP and SIP.js developer James Criscuolo put it, "Supporting multiple codecs makes it more complicated for everyone involved on the development side, but the result is better interoperability, which is a win for the consumers in the end."